1755- School is renamed to, "College of Philadelphia"

Spring 1765- John Morgan establishes the first medical school in America (known today as Perelman School of Medicine at Penn); William Shippen, Jr. becomes its first professor (Morgan and Shippen argued their entire lives over whether Morgan started the school, or whether they deserve dual credit)

August 1, 1769- Rush is officially named the first professor of chemistry at the College of Philadelphia

1776- Rush, as recently elected member of the Continental Congress, joins its medical committee

1777- Rush publishes treatise on preventive medicine in the military; soon after named Surgeon General of the Middle Department for Revolutionary War

1778- Rush is forced to resign as Surgeon General by his mentor/tormentor William Shippen, Jr. and returns to post-occupation Philadelphia and resumes his medical practice

1801- Rush publishes "Six introductory lectures, to courses of lectures, upon the institutes and practice of medicine"

November 2, 1807- Rush gives a lecture titled "On the Duty and Advantages of Studying the Diseases of Domestic Animals" at the University of Pennsylvania medical school that will inspire the founding of its School of Veterinary Medicine

January 24, 1811- Rush publishes "Sixteen introductory lectures, to courses of lectures upon the institutes and practice of medicine"

Classes at Penn were first held at Surgeon's Hall (on 5th and Walnut St.). The reaction Rush had when he first walked into the building was engrossed, and sometimes overwhelmed. He felt a different kind of environment from his professorship in chemistry.

Each fall, Rush was expected to write and deliver the Introductory Lecture to courses of Lectures upon the Institutes and Practice of Medicine, where Rush wrote about an important and medically inspirational topic. There were also his writings, practices, and memorization that appeared in front of his students. He had to turn down invitations, including Thomas Jefferson's, due to working on his lectures. 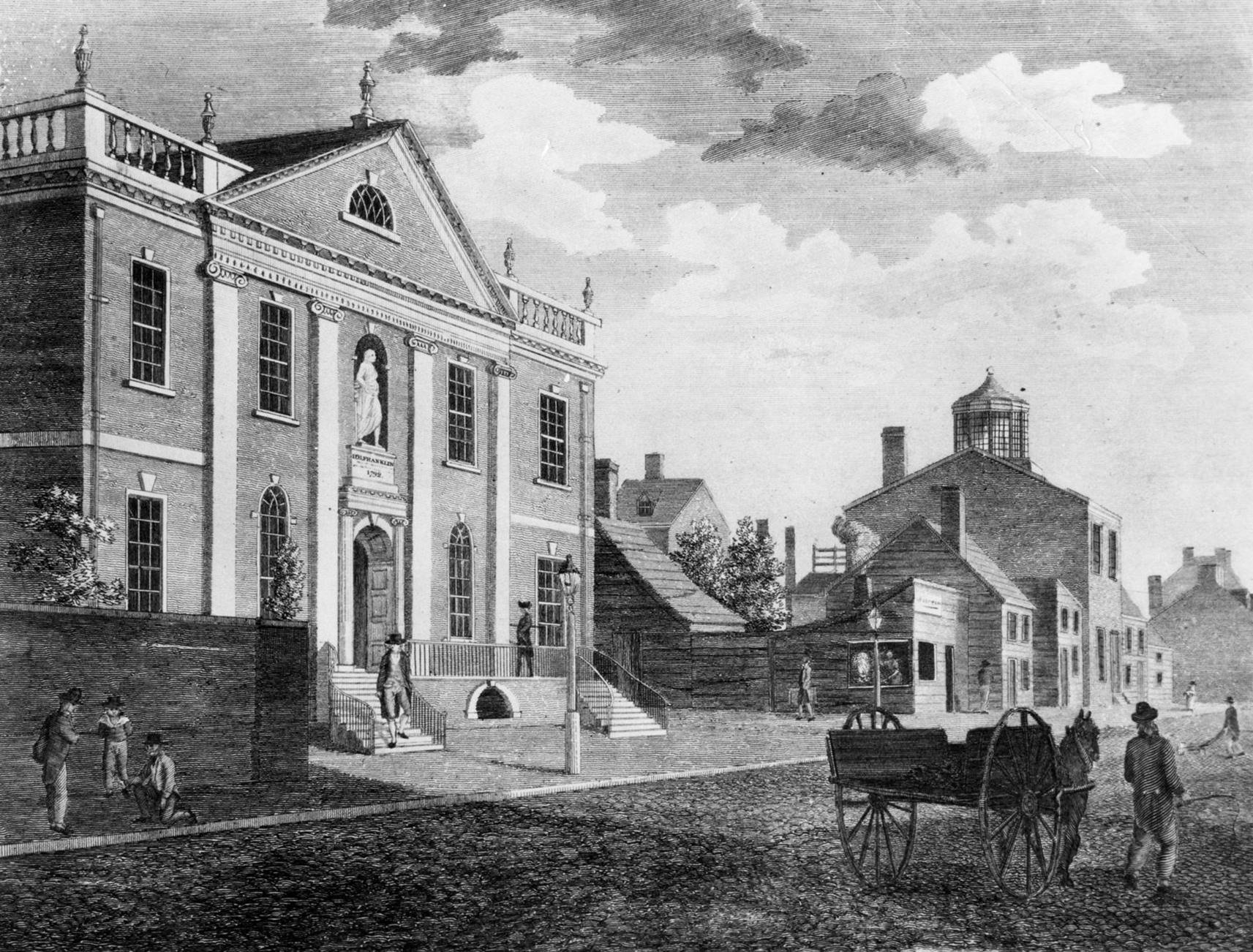 Sixteen Introductory Lectures, to Courses of Lectures Upon the Institutes and Practice of Medicine

LECTURE 1: On the necessary connexion between observation and reasoning in medicine

SYLLABUS of a course of lectures upon physiology, pathology, therapeutics, and the practice of medicine

LECTURE 2: On the character of Dr. Sydenham

LECTURE 3: On the causes of death in diseases, that are not incurable

LECTURE 4: On the influence of physical causes, in promoting the strength and activity of the intellectual faculties of man

LECTURE 5: On the vices and virtues of physicians

LECTURE 6: On the causes which have retarded the progress of medicine, and on the means of promoting its certainty, and greater usefulness

LECTURE 7: On the education proper to qualify a young man for the study of medicine

LECTURE 8: On the construction and management of hospitals

LECTURE 9: On the pains and pleasures of a medical life

LECTURE 10: On the means of acquiring business, and the causes which prevent the acquisition, and occasion the loss of it, in the profession of medicine

LECTURE 11: On the utility of a knowledge of the faculties and operations of the human mind, to a physician

LECTURE 12: On the opinions and modes of practice of Hippocrates

LECTURE 13: On the duty and advantages of studying the diseases of domestic animals, and the remedies proper to remove them

LECTURE 14: On the duties of patients to their physicians

LECTURE 15: On the means of acquiring knowledge

LECTURE 16: On the study of medical jurisprudence

TWO LECTURES upon the pleasures of the senses and of the mind; with an inquiry into their proximate cause 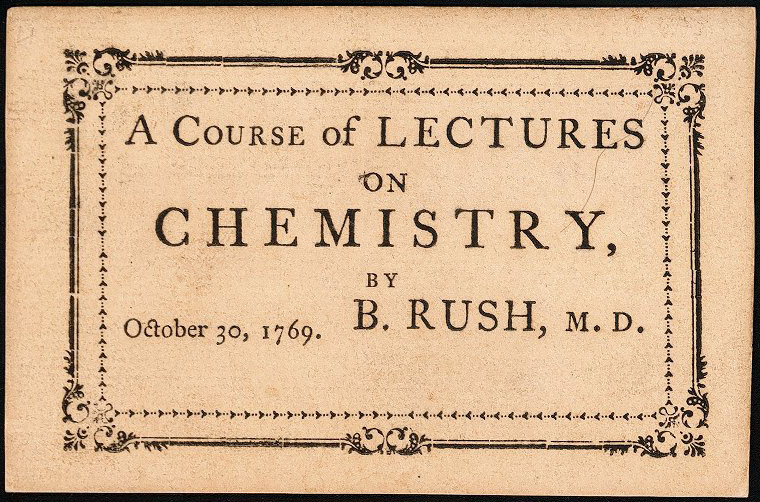 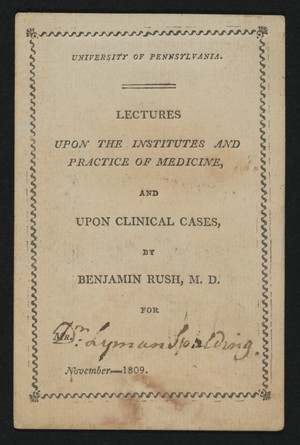 From the Lyman Spalding papers in Harvard University's Francis A. Countway Library of Medicine 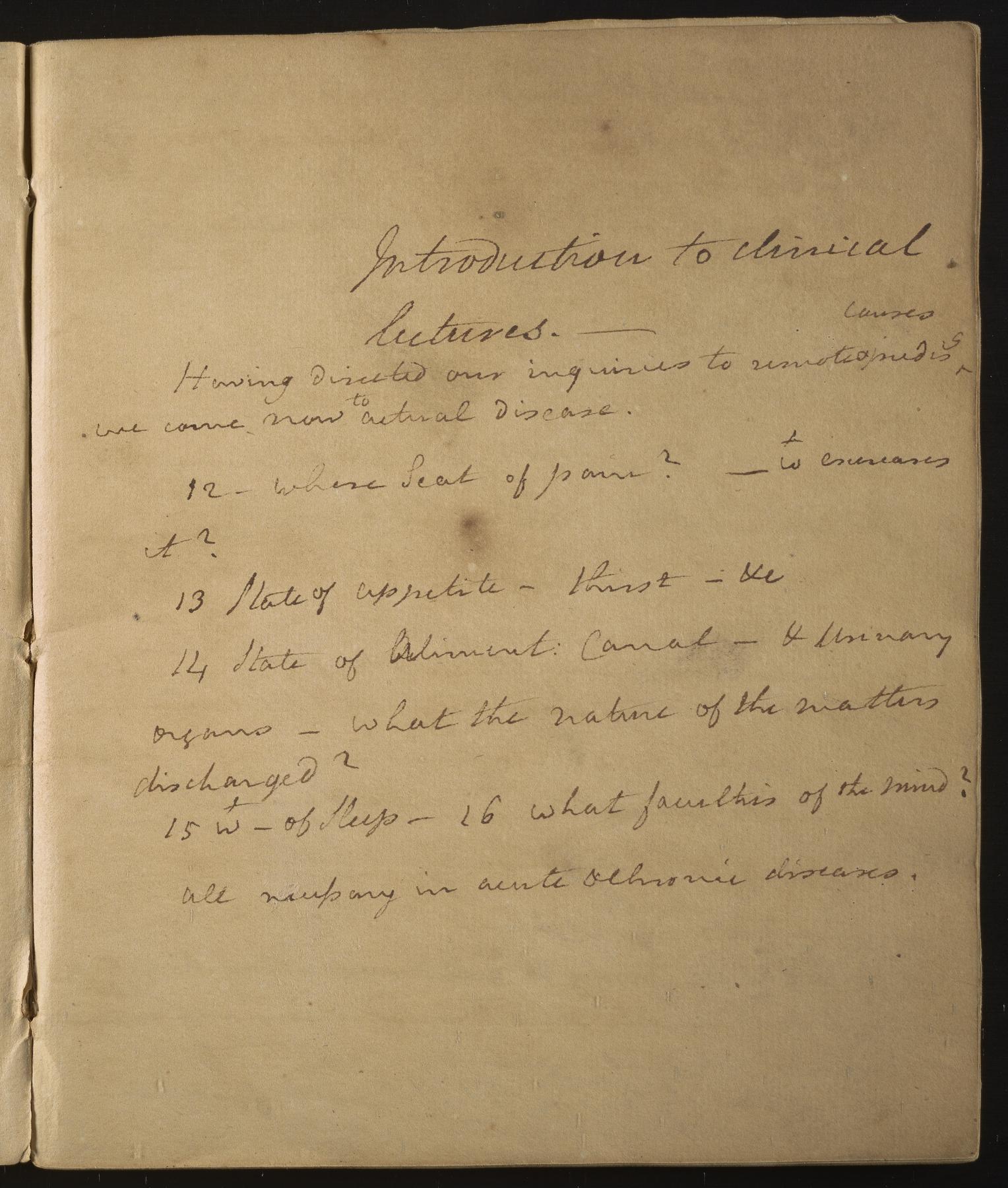 From the "For the Health of the New Nation: Philadelphia as the Center of American Medical Education, 1746-1868" repository from OPenn