In February, Common Press hosted Josh MacPhee, a founding member of Justseeds Artists' Cooperative, for four days of printing - both in workshops with students and in the letterpress studio. Supported by The Sachs Program for Arts Innovation, these events accompanied an exhibition of political graphics focused on climate justice and migration and culminated in a panel discussion featuring MacPhee alongside local artist - activists Mabel Negrete (Counter Narrative Society) and Heidi Ratanavanich.

Billed as Agit Prop or Activist Poster Printing workshops, we met as two groups:15 in the screenprinting studio on February 7, and 12 in the letterpress studio on February 9. Participants included students from a range of disciplines, as well as a few Penn staff and community members. Inspired by the climate focus of the exhibit, MacPhee preseneted the following prompt: imagine that an Environmental Protection Agency official is speaking in Philadelphia tonight, and there's a protest planned to push for further environmental protections. You have six hours to come up with a concept, create a poster, and print copies. Participants had two articles to pull from: one about the state of the bee population and one about oil refineries (a hot and timely topic with the recent closure of the large urban refinery PES within the city of Philadelphia) and worked in groups to convey a message succinctly in text and image.

Our letterpress studio workshop focused on working with text visually. Several participants are involved in climate justice activism on campus and shared their work.

Whereas many college printmaking classes spend weeks to produce a small edition of prints (ending up with 5 good copies of a design), participants printed roughly 300 posters in total over 2 days, including 9 different designs -- applying the kind of collaboration that is necessary not only in an activist print setting, but in many design and work situations. 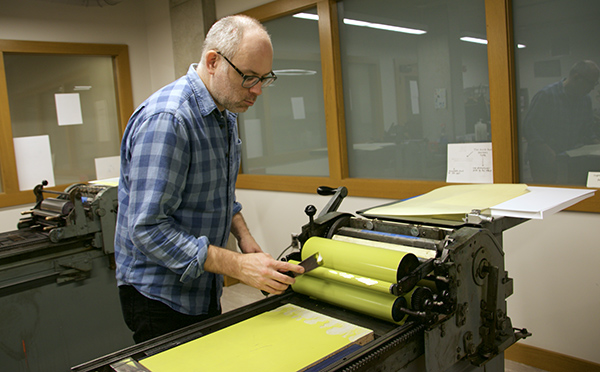 In between workshops, Josh MacPhee worked in the Common Press studio on a diptych of his own concept.

Our weekend culminated in a reception showcasing the weekend's work, alongside the exhibit of Justseeds portfolio prints, and a panel discussion. Guided by moderator Candy Gonzalez, panelists talked about their different relationships to art and activism. Josh MacPhee focused on his work on carceral justice issues, in particular work creating graphics for the campaign to close Rikers Island. Mabel Negrete discussed her work as Counter Narrative Society highlighting indigenous communities, including a series of workshops this year exploring the impacts and listening to experiences of pan-Indigenous erasure here in Philadelphia. Heidi Ratanavanich shared collaborative work including working with community members to teach furniture building from pallets and Fortune, a a year-long print project with monthly issues, centering queer and Asian writers & artists.