“Already, against all prejudices, this feeling [of justice] returns to us [women] the very thing prejudices seem to refuse us. Already, several women artists receive from the government encouragement and rewards. Already, enlightened men whose merit surpasses petty desires for domination are disposed to become our advocates.” librettist Constance de Salm, 1798

Welcome to the LibGuide dedicated to the subject of operas composed by women. It is based on the 2002 exhibit, “In Her Own Hand: Operas Composed by Women 1625-1913”,  that I curated for Harvard University's Loeb Music Library. It was the first, and over a decade later, remains the only exhibit in an American library on this subject.

My exhibit contained 20 works representing 18 composers, combining works from the Isham Library’s collection of microfilms, facsimiles and rare manuscripts with the newly acquired manuscripts and prints of the Ruth N. and John M. Ward Collection of Opera scores. The Isham Memorial Library has one of the most extensive collection of original manuscripts and prints of music by women in the world. This LibGuide gives me a chance to expand the content, and add updated information based on my latest research on the topic.

Given the limits placed on women’s education and ambitions in the name of propriety, it is a wonder that any women prior to the 20th century were able to conceive of themselves as artists, yet alone have their works produced and published. Although most musical creations by women are in forms that stood a better chance of being heard in a private setting, such as religious and chamber music, many women dared to write for the stage.

To succeed as an artist and public figure required engaging in the forceful self-promotion that was usually diametrically opposed to women’s education and societal upbringing. Societal expectations that women should be modest, self-effacing, concerned with purely domestic pursuits and passive contradicted women’s desires for professional achievement in arts and literature. Throughout the centuries, one finds that women who succeeded in making a name for themselves depended upon the financial and emotional support of a male relative or patron to obtain access to education and contacts, though occasionally women in positions of power could provide this same support.

Women who had access to the theatrical and musical worlds as actresses, dancers or singers or who came from literary, musical or theatrical families were more likely to achieve some degree of success as composers or librettists than women without such connections. If a woman came from  the aristocracy, she was likely to have easy access not only to an education that included foreign languages, history and classical literature, but to private concerts by some of Europe’s finest musicians as well as a court theater at her disposal.

This exhibit merely scratches the surface of women’s contributions to music for the stage, but in it, one finds a fairly complete representation of the developments of opera as it traveled from the Italian courts to Versailles in the 17th century, on to the courts of the Holy Roman Empire and the German Princely States in the 18th century, and finally to the public opera houses of post-Revolutionary Paris and beyond.

What is now known to us as the Ward Collection was originally assembled by the Belgian conductor Jean-Marie Martin. Overall, it is rich in 19th-century French opera with an emphasis on multiple versions of the classics (and lesser-known works). It has sub-specialties in Flemish opera; East European and Russian opera (in slavic-based and turkic-based languages); Nazi composers and scores "arranged for the German stage.” There are also many operettas and ballets in the collection, which are housed in the Theatre Collection of Harvard's Houghton Library. There are 8500 scores in the collection, and one senses that what I was able to present in my exhibit was just the tip of the iceberg when it comes to improving our understanding of women's contributions as composers to the operatic stage. 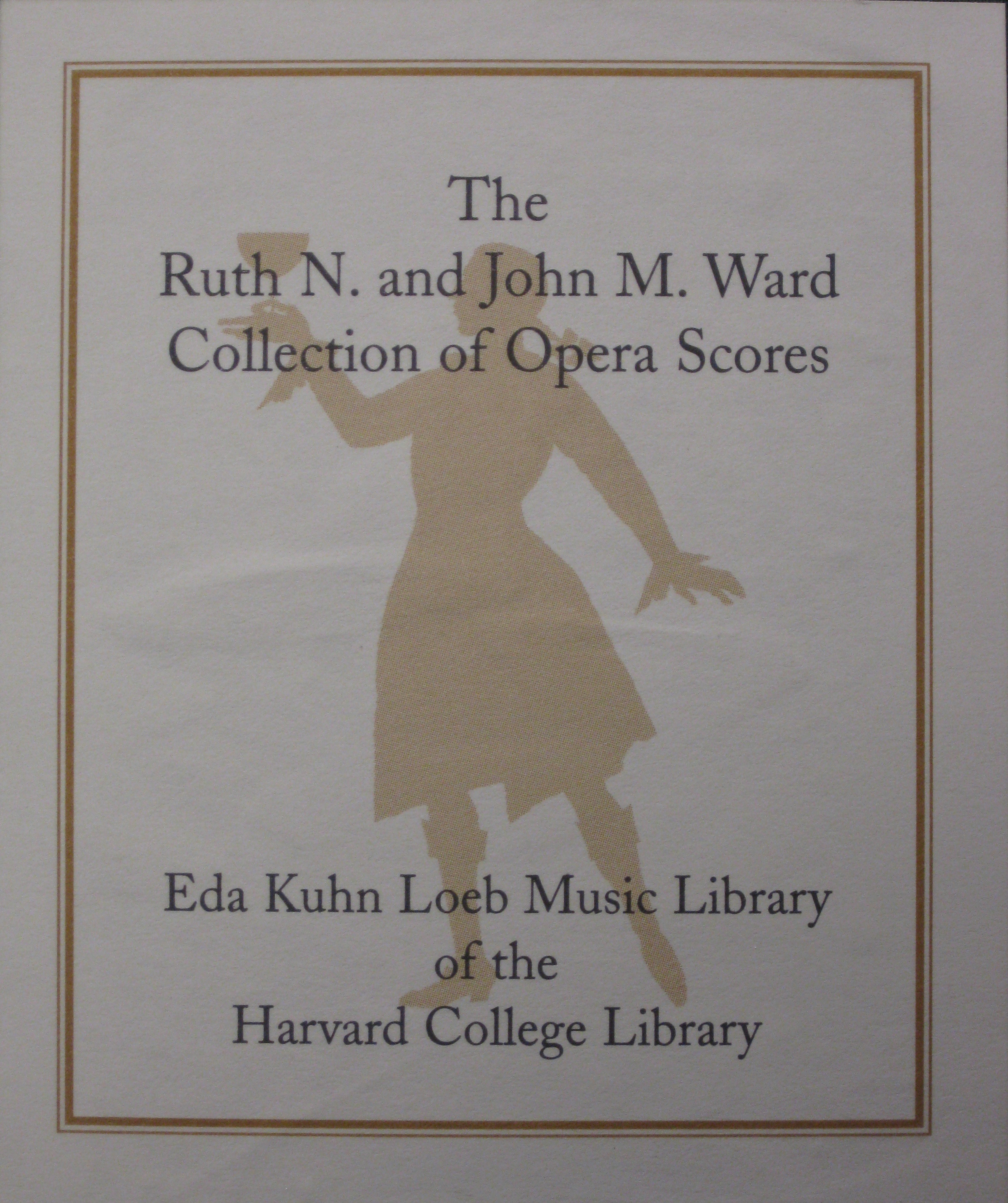 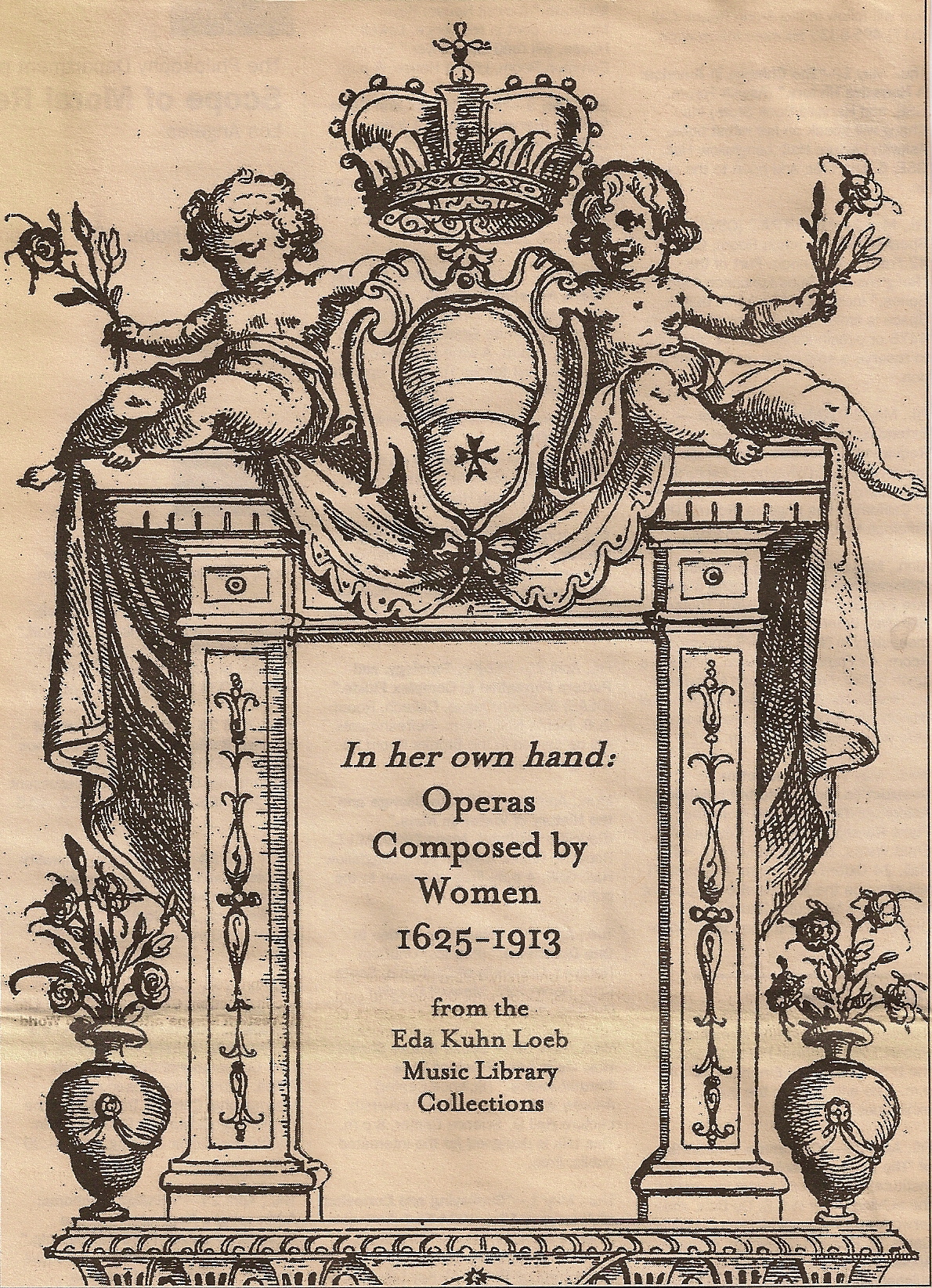 In Her Own Hand Poster