The Ruth Neils and John M. Ward Collection of Opera Scores contains numerous works by women including the aforementioned Louise Bertin and Loïsa Puget, as well as works by Marie, Vicomtesse de Grandval (1828-1907), Marguerite Olagnier (1844-1906), Augusta Holmès (1847-1903), Gabrielle Ferrari (1851-1921), and Juliette Folville (1870-1946). An interest in popular, even sensational contemporary subject matter is a trend in evidence throughout 19th-century opera, as is an interest in the “exotic.” Usually this means some country to the east of Europe such as Russia, Ukraine, or Egypt, but exotic things can also be found across the Atlantic in Louisiana.

Augusta Holmès was encouraged in her musical interests by her godfather, the poet Alfred de Vigny. She studied  piano and organ as a child. Of Irish parentage, she moved to Paris in 1875 and became known in those artistic circles as an advocate of Wagner. She likely studied composition with Franck, and she composed and taught professionally until her death. Although better known for her symphonies, secular songs and sacred works, she did nevertheless compose one work that reached the stage of the Paris Opéra:  La Montagne Noire(The Black Mountain). Both the music and libretto are by Holmes, and depicts the story of Mirko, a Montenegran soldier, who falls in love with Yamina, a Turkish slave, thus betraying his fiancée Héléna and his Christian upbringing (Yamina is repeatedly referred to as “l’esclave infidèle,” playing on the double meaning of “infidel” both as unfaithful and non-Christian). The story ends with Yamina’s escape during a battle and Mirko’s death at the hands of his best friend. The inscription on the library copy reads “A Monsier L. Cogniet/ Souvenir bien amical et sympathique de l’auteur./ Augusta Holmes/ mai 1895” [friendly and warm remembrances of the author]. (HOLLIS Call Number: Mus 696.529.610)

Marguerite Olagnier was a singer at the Théâtre des Varietées in Paris before leaving this position to travel to Egypt with her husband. Her four-act opera Le Saïs is thought to have been written there. It was staged at the Théâtre de la Renaissance in Paris on 18 December 1881. She later directed her own company called the Théâtre de l’Oratorio in weekly performances of 18th and 19th-century oratorios. Other operas she composed were likely never performed.  For Le Saïs, Olagnier wrote both the libretto and music. The work partakes of the late-19th century orientalism craze, and is full of semi-scandalous images of the Near East such as the Scène du Hachich, where the characters sit at the base of a pyramid drinking hashish, or the scene set in the Serail where the young slave girls are seduced by “La blonde Sultane.” The library’s copy contains an inscription: “A Mademoiselle Richard de l’Opera/ Offert par l’auteur/ Marguerite Olagnier” and contains singer Renée Richard’s personal stamp.

Marie, Vicomtesse de Grandval’s first large stage work, the operette Le sou de Lise premiered in Paris at the Bouffes-Parisiens in 1859. It was published under a pseudonym, as were many of her works. In 1880 she won the Concours Rossini for her oratorio La fille de Jaïre, a copy of which is also in the Ward collection. In addition to operas, she was known as a composer of symphonies, concerti, chamber music and vocal works, both secular and sacred. Her work found favor with her contemporaries, and her friendship circle included many of the well-known composers and musicians of the time, including Saint-Saëns (one of her teachers), Georges Bizet, and Charles Gounod. Mazeppa is a later work. It premiered in Bordeaux at the Grand Théâtre on 24 April 1892 and was published that same year. This opera in five acts and six tableaux (libretto likely based on the Pushkin poem on the same subject) dramatizes the story of the 17th-century Ukrainian separatist Ivan Stepanovych Mazepa. The music is full of Eastern European colorings, most recognizably in its use of low male voices (three of the five lead characters are bass-baritones) and in the divertissement which includes an “Air Russe Populaire,” a Mazurka (a polish folk dance), and a “Danse Ukrainienne.” The inscription on it reads: “A monsieur Charles Morel avec le mielleux  souvenir/ de son beau talent C. de Grandval” [to Mr. Charles Morel with the honeyed remembrance of his great talent]. This library copy is a first edition which contained multiple printing errors. It was reissued in a corrected “Nouvelle Edition” the same year.

In November 2015, I was able to find 165 works by Grandval listed in WorldCat. There are recordings of a few of her songs and a concerto for oboe, but none yet of her operas. There are multiple copies of Mazeppa to be found in the US and Europe, including one at the Free Library.

Juliette Folville was a Belgian pianist, violinist teacher and composer who began her musical studies with her father before entering the Conservatoire in Liege. There she won the premier prix (1887) in counterpoint and fugue. She was one of many European women in the 19th century to make a career as a touring virtuosa (on both violin and piano), and a pioneer in the revival of the harpsichord. Her first and only dramatic work Atala (premiered 3 March 1892 at the Grand Théâtre, Lille) is dedicated to the memory of her father. The story centers on the tragic love of the former-slave and warrior Chactas for the young and beautiful Atala, both members of Natchez tribe of Louisiana. It is one of several settings of this story by the 19th-century author François René, Vicomte de Chateaubriand.

Below are pictures the score that was published in Liège in 1894 by V. L. Muraille. Since then, a manuscript version of the work has been discovered in the Ward Collection, and cataloged. That citation is in the Bibliography.

Gabrielle Ferrari studied in Italy, Germany and France, returning to her birthplace of Paris after her marriage to Francesco Ferrari, an Italian correspondent for Le Figaro. Her career largely followed the acceptable contour of an career for a female musician in 19th-century France, that of the concert pianist and song composer. However, she found greater success as an opera composer than did her colleague Holmès: five of  Ferrari’s eight operas were performed in Paris in the course of her lifetime. A champion of  Russian music and of verismo, her lyric drama Le Cobzar sets a story of love, jealousy and murder in a contemporary Romanian village (libretto by Hélène Vacaresco and Paul Millet). It premiered in Monte Carlo on 16 February 1909, but was expanded into two acts and opened at the Paris Opera on 30 March 1912. The composer’s copy was on display in the exhibit, and likely shows revisions that took place between those two versions. It also contains a concert ending for the second act dances [rehearsal number 109], as well as a leaf showing the composer at work setting an Italian language text to part of the original French [rehearsal number 63].

A November 2015 search through WorldCat shows there are 97 works by Ferrari in libraries worldwide, many of them songs in Spanish.

The pictures of Ferrari and her librettist come from a contemporary Musical America profile of the composer. 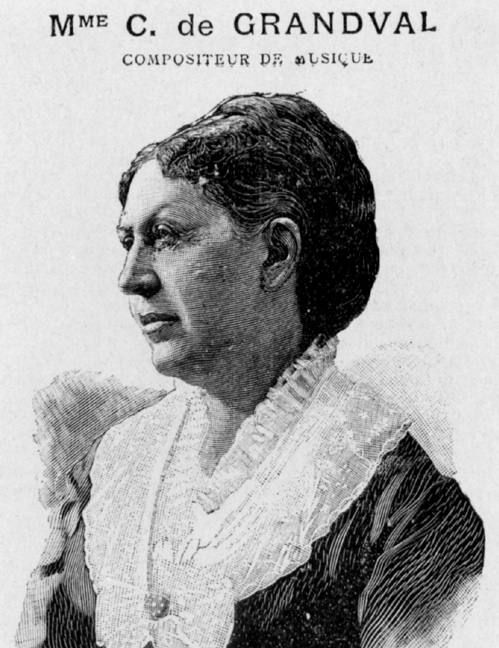 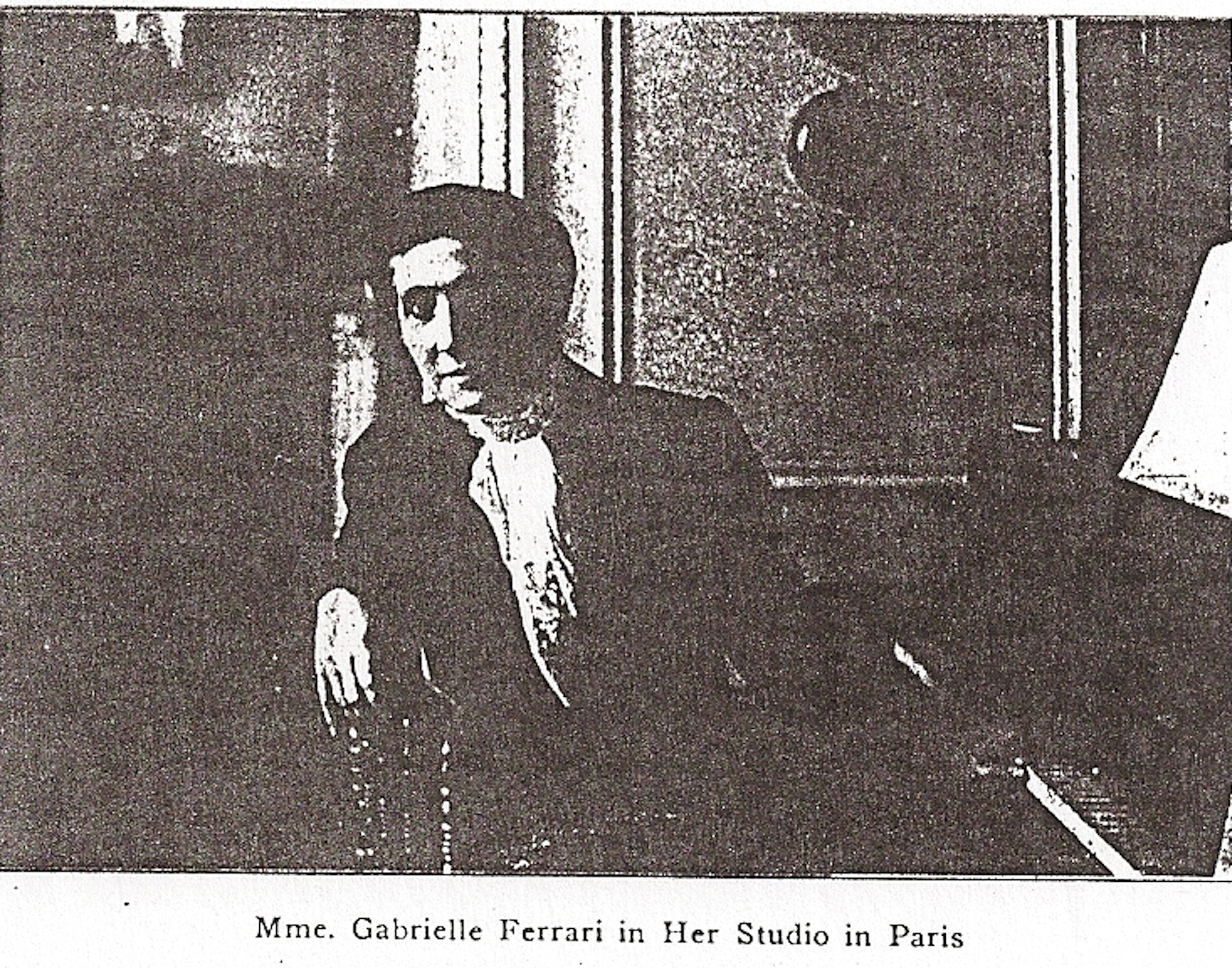 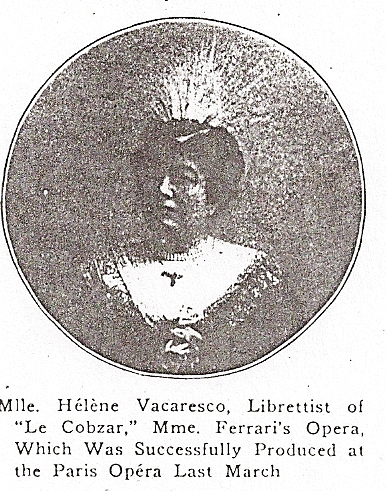