Skip to Main Content
It looks like you're using Internet Explorer 11 or older. This website works best with modern browsers such as the latest versions of Chrome, Firefox, Safari, and Edge. If you continue with this browser, you may see unexpected results.
Penn Libraries Franklin help
Go to Franklin
Advanced Search 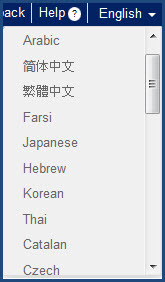 You may change the language of the search interface in Franklin Articles+.  To select from over 30 available interface languages, click the icon and then  English in the pop-up menu

When in a specific language interface, in instances where the final vowel of a word is dropped when the next word begins with a vowel, when the second word is searched, both forms are found.  For example, in French, searching amour will also find l'amour.