A guide created to discussion numerous aspects of scholarly communication, such as: open access publishing, copyright and creative commons licensing, scholarly profiles, and the h-index

What do you mean by citation metrics?

These metrics are measured through the number of times a publication is cited. Citation metrics include the h-index, citation counts through Scopus, impact factors, and SciVal to count citations over time.

H-index: what it is and how it is calculated

The author in this example has a h-index of 8, because they have 8 papers that have been cited more that 8 times. They do not have an h-index of 9 because the 9th paper was only cited 8 times. 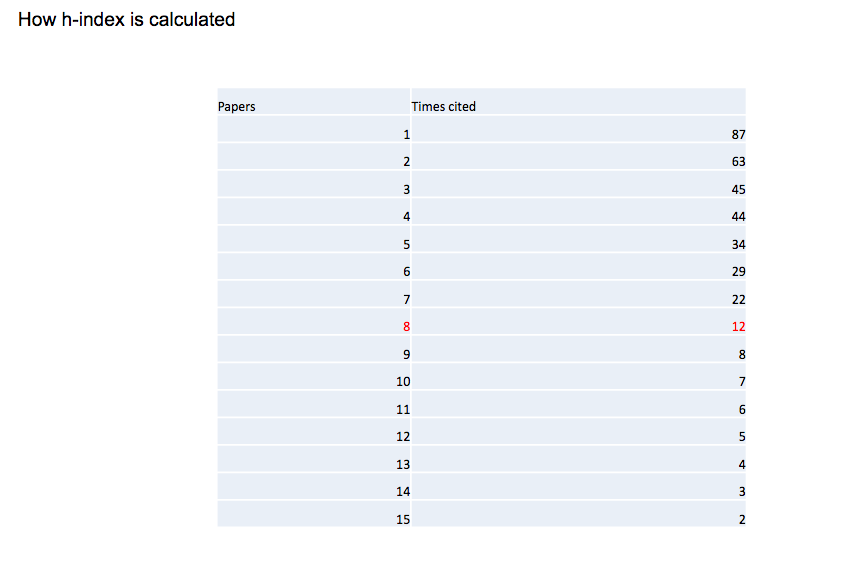 From Wikipedia: The h-index is an author-level metric that attempts to measure both the productivity and citation impact of the publications of a scientist or scholar. The index is based on the set of the scientist's most cited papers and the number of citations that they have received in other publications. The index can also be applied to the productivity and impact of a scholarly journal[1] as well as a group of scientists, such as a department or university or country.[2] The index was suggested in 2005 by Jorge E. Hirsch, a physicist at UC San Diego, as a tool for determining theoretical physicists' relative quality[3] and is sometimes called the Hirsch index or Hirsch number.

The h-index is defined as the maximum value of h such that the given author/journal has published h papers that have each been cited at least h times.[4] The index is designed to improve upon simpler measures such as the total number of citations or publications. The index works properly only for comparing scientists working in the same field; citation conventions differ widely among different fields.

Text is available under the Creative Commons Attribution-ShareAlike License;