The Benjamin Rush Portal project began in late winter of 2020, when the University of Pennsylvania Libraries had to postpone a talk by alumni author Stephen Fried (’79) about his recent biography of Rush because of Covid. Barbara Cavanaugh of the Biomedical Library, who had invited Fried and commissioned a small Rush exhibit to accompany the talk, rescheduled the talk for several months later as a zoom session titled, Rediscovering Benjamin Rush, Yellow Fever & the Revolutionary Early Days of Penn Medicine. She also asked Yen Ho, then a very ambitious library science intern at the Penn Libraries Biotech Commons, to convert the exhibit to an online format.

The portal started with material from Fried’s book, as well as timelines he had created for that project, and links to some of Rush’s own writing. But over the next months it grew into a burgeoning resource for “all things Rush”—with the goal of offering links for easy access to all of Rush’s published writing.

During this same time, thousands of pages of Rush’s own handwritten lecture notes, from the collection of the Library Company of Philadelphia, were being digitized by Penn for the “For the Health of the New Nation” initiative, an effort organized by the Philadelphia Area Consortium of Special Collections Libraries (PACSCL) and funded by the Council on Library and Information Resources (CLIR). The portal was able to offer the first-ever access to this amazing resource. (Before this digitizing, the only notes on Rush lectures available online were those taken by his students)

By the time Fried actually gave the talk, Rediscovering Benjamin Rush, Yellow Fever & the Revolutionary Early Days of Penn Medicine, in June of 2020, the website had taken on a life of its own, and Ho and Fried continued to develop it. For the fall anniversary of the 1793 Yellow Fever epidemic so crucial to Rush’s career, Fried got permission from Princeton University Press to allow the portal to post, for free access, all the letters Rush wrote during the epidemic, and their annotations—hundreds of pages from the Letters of Benjamin Rush edited by Lyman Butterfield. He also got permission from Butterfield’s children to offer this and other Rush materials developed by their late father (including his typescripts of Rush’s diaries from Edinburgh and Paris during his medical studies.) And Duke University Libraries agreed to let the portal post the hand-written versions of Rush’s Yellow Fever letters, from its collection.

In September of 2020, Fried and Ho presented a Zoom talk about the project for The Library Company of Philadelphia, “Breaking News from Benjamin Rush History,” to which founding father scholars from around the country were invited, to share ideas about what else the portal could accomplish. (After Ho graduated, Michael D’Agostino, a librarian from Drexel University, redesigned the portal with Fried, migrating much of Ho’s work to its current form.) Because of connections formed by the portal, all of the letters written by Benjamin Rush that were edited by Lyman Butterfield will soon be republished and made more easily accessible to scholars, students and history buffs. And we are open to your suggestions about what else the portal can accomplish: email stfried@upenn.edu. 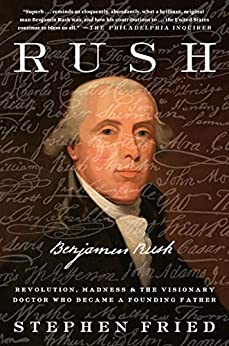 The Rush Portal was inspired by “Rush: Revolution, Madness & the Visionary Doctor Who Became a Founding Father” by Stephen Fried (University of Pennsylvania Class of 1979)