Incorrect “facts” about Benjamin Rush that have proliferated on social media

According to society records, neither was involved when it was founded, in 1775, by their friend Anthony Benezet. Rush joined in 1784 (when the group, quiet during the war, began meeting again as Benezet was dying). But the real turning point for the organization came in 1787 when Franklin (who had recently returned from years overseas) and Rush became officers of the reborn group.

Benjamin Rush NEVER wrote or suggested that the Constitution “should make special privilege for medical freedom as well as religious freedom".

A bogus quote attributed to him that ends with that line—invoking the fear that “medicine will organize into an undercover dictatorship” and claiming laws that “restrict the art of healing to one class of men” were “un-American”--is shared endlessly on social media. It is usually attributed to the popular but largely un-fact-checked AZQuotes site.

But the bogus quote has actually been published, in one form or another, since 1899. It first appeared in a speech delivered at the Homeopathic Medical Society of Chicago, and was then embellished in several regional medical journals between 1912 and 1918. But it became widely popularized in 1960, when a version appeared in The Great Quotations, a wildly successful 893-page American reference book by George Seldes. (It appears on page 652, uncited, but Seldes was not very demanding of primary sources. Below it is a quote from Dr. William Osler—the one about “the desire to take medicine” separating man from his fellow creatures--which comes from a published speech he gave in 1894; but is instead cited to a 1957 article in the Boston Globe.) It was then entered into testimony in 1962 at the U.S. House of Representatives debate on immunization policy by a representative of the National Health Federation, and went on to be invoked in many medical and policy settings.

It wasn’t until 2003 that anyone noticed that the quote had never been attributed to an actual piece of Rush writing—and the identity of the noticer was a surprise. It was Dr. Thomas Szasz, the radical psychiatrist who wrote The Myth of Mental Illness (1961) and other anti-psychiatry tomes, and who villainized Rush for being the founder of more biological and disease-driven approach to treating mental health problems. He started noticing the quote in different places, especially as use of the internet grew, and so he wrote to the Library of Congress asking for help verifying its origin; a librarian there confirmed it was bogus. So, Szasz started collecting examples of published—and often further embellished—versions of the quote. And in 2005 wrote a paper about the quote and his quest for the journal History of Psychiatry: “A bogus Benjamin rush quote: contribution to the history of pharmacracy”. (He also used the opportunity to repackage his criticisms of Rush’s psychiatric ideas, updated versions of which were by then were considered mainstream, evidence-based medicine, which Szasz decried.) The blistering article said that the bogus quote was mostly used “by various ‘therapeutic’ interest groups” including those hoping to abolish the FDA and expand the medical uses of massage. He especially was troubled that medical marijuana advocate Lester Grinspoon, who employed and further embellished the quote, invoking “Rush’s concern about medical fascism.” Szasz’s efforts to stop the proliferation of the bogus quote were unsuccessful, as were those of the very good hoax-exposing blog wafflesatnoon.com in 2016.

Author Stephen Fried didn’t discover this controversy until after publishing his biography of Rush. But since then, he has periodically (and sometimes daily) posted corrections and disclaimers about it on Twitter. His efforts have been noticed by twitter historians, including one cartoonist who likened his quixotic labors to a game of American History whack-a-mole. 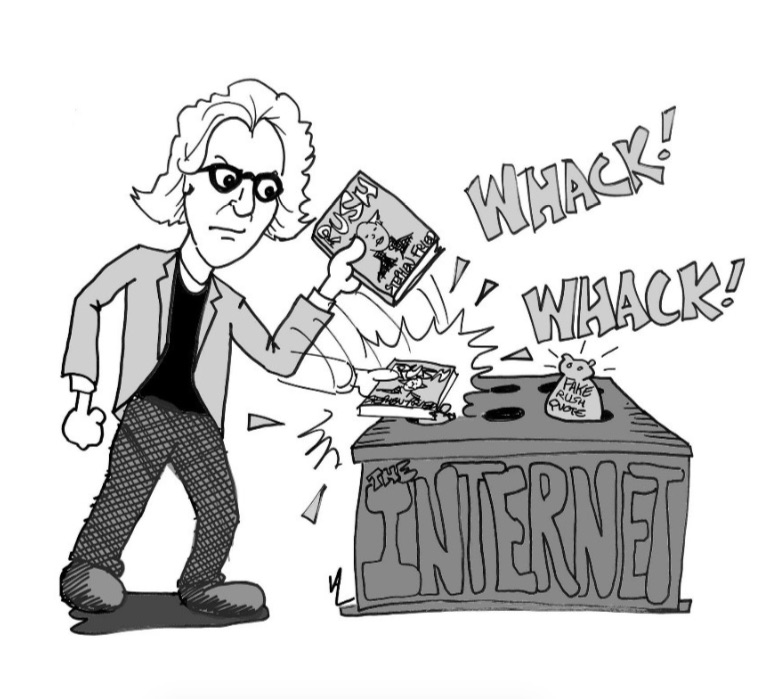 Benjamin Rush did not treat George Washington, nor did he have anything to do with Washington’s death.

Benjamin Rush did not perform surgery on John and Abigail Adams’ daughter Nabby for breast cancer, as portrayed in the HBO series “John Adams.”

While Rush did act as medical advisor for the Adams family, his involvement with her cancer diagnosis and treatment was done entirely via the mail. In his letters, he begged Nabby to have surgery, even though her husband and local doctors said it wasn’t necessary. By the time she had her mastectomy, the cancer had already spread too far, but the family credited Rush with extending her life.

Benjamin Rush did not coin the phrase “two wrongs don’t make a right”— although he clearly inspired it.

On August 2, 1783, he wrote in a letter to Elias Boudinot "three wrongs will not make one right." He was referring to the “Philadelphia Mutiny,” protests by Revolutionary War soldiers over pay that led to the capital be relocated from Philadelphia. It is unclear when and how Rush’s turn of phrase shed one of its wrongs.

Benjamin Rush did not invent or ever use the word “negritude.”

The word was created by poet Aimé Césaire in 1935. Ironically, the idea that Rush invented the word was popularized in a 1970 anti-Rush rant in a book by Thomas Szasz, The Manufacture of Madness. On page 154 he claims, incorrectly, that Rush had a “theory of Negritude,” and countless writers have since used Szasz as a source for this. For more on how this mythology got started, see this 2020 Philological Quarterly article by Brian J. Reilly.

There is no evidence Cartwright ever knew or studied with Rush, nor did he attend Penn. He was, however, a protege of one of Rush’s least favorite and most controversial students, Charles Caldwell who, when he couldn’t get the positions he wanted in Philadelphia, moved to Kentucky and at two different medical schools expounded his appalling racist medical ideas--which were the opposite of Rush’s. For more on this see this 2018 Journal of Southern History paper by Christopher Willoughby.