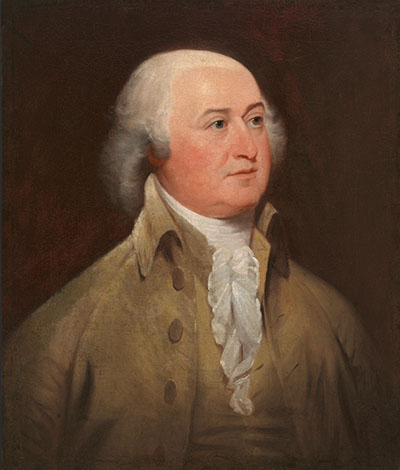 In the summer of 1774, the delegates from Massachusetts arrive in Philadelphia to meet the Pennsylvania delegation at a farm in Frankford. Their meeting took place before the first-ever Continental Congress was held in Philadelphia at Carpenters' Hall. The Massachusetts delegates include John Adams and his older cousin Samuel Adams. Rush was invited to join in the meeting. Many were interested in meeting Samuel Adams, but Rush was more intrigued in meeting John Adams. He took the opportunity to get to know Adams by taking a carriage ride along with him. During the carriage ride around the city, Rush explained to Adams about the kinds of people he would meet in Philadelphia.

●  Letters to and from John Adams

In 1773, Rush met a French Quaker abolitionist named Anthony Benezet. Benezet chatted with Rush about taxing the importation of new slaves heavily so that the practice of slavery would be prohibited. He had Rush write the pamphlet that same year.