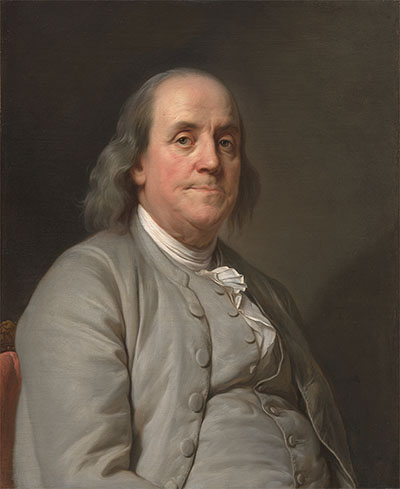 Rush noted that Franklin "'once took me to Court with him and pointed out to me many of the most distinguished public characters of the nation. I never visited him without learning something.'

...Rush appeared to record almost everything Franklin ever said or did in his presence. This may be because Rush initially found himself confronting not just the heroic, mythic Franklin he always heard about as a child, but the actual, three-dimensional Franklin, who, at sixty-two, had some of the same self-control issues with women that young Rush recognized in himself." (Fried, 64-65)

●  Letters between Rush and Benjamin Franklin

After 5 years of being Dr. John Redman's apprentice, Rush sails abroad to England to begin his medical education at the University of Edinburgh. Rush was also expecting to reach out to Benjamin Franklin for letters of introduction to the proper medical authorities in Edinburgh.

The University of Edinburgh was considered the first school of physic, according to Rush, and he hoped to learn a lot from Dr. William Cullen. It turns out that Rush struggled with the separation of religion and science after learning about Cullen's views on religion. Cullen believed in the "'immateriality and immortality of the soul'".

While studying abroad, Rush kept in touch with Dr. John Morgan. Morgan promised Rush that after he graduates, he would hold an opening for Rush to become the youngest member of his new Philadelphia Medical Society. Morgan and Dr. William Shippen, Jr. were still feuding with each other at the time. When Rush wrote his dedication in his thesis, he wrote Shippen's name first before Morgan's. Rush ended up writing an apology letter to Morgan, explaining to him why he put Shippen's name first.

After graduating from the University of Edinburgh, Rush moved to London and worked at Middlesex Hospital and St. Thomas's hospital alongside the surgical and anatomical legends: Drs. William Hunter and William Hewson. He also met Drs. John Pringle and John Fothergill, and painter Sir Joshua Reynolds. The most important person Rush was waiting to meet was Benjamin Franklin.

Reynolds invited Rush to a dinner party where he would meet Dr. Samuel Johnson and Oliver Goldsmith.

Franklin sent Rush to Paris by giving him 200 pounds ($33,000) to spend on his trip. The person he first met in Paris was Dr. Jacques Dubourg, a close friend of Franklin. Dubourg brought him to be presented at the home of Victor de Riqueti, the Marquis de Mirabeau.

Rush kept handwritten journals during his trip abroad. Below are typescripts of the journal he kept in Edinburgh and the one he kept in France. His journal from London is currently missing.
Typescripts are shared with permission of the Massachusetts Historical Society.